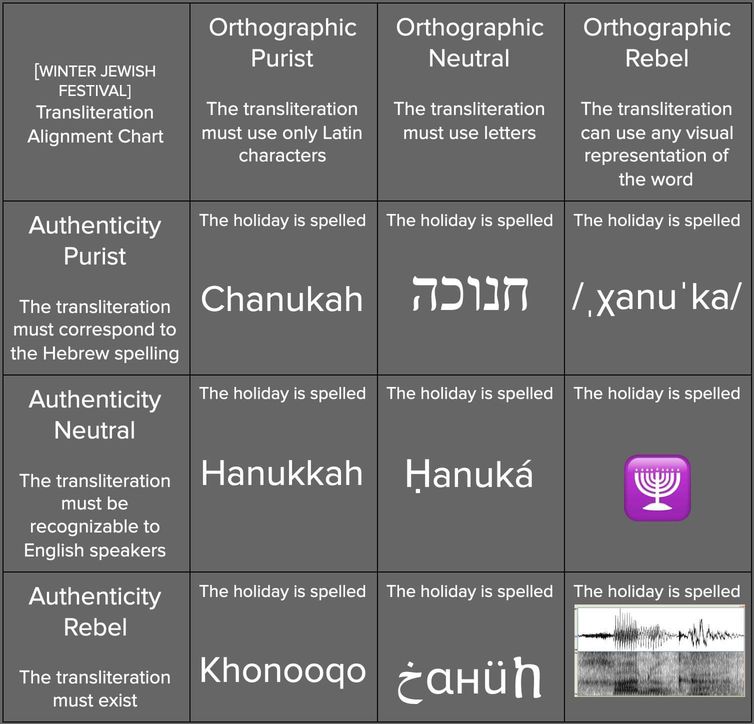 What Transliteration Is and Is Not

Translators wrestle with the nuances of their languages. Words can have semantic domains that do not neatly map to words in the language into which they are translating. Choices are made at every level to capture the author’s meaning while simultaneously ensuring that the translation is intellegible.

Going from one script to another is a more mechanical process which can give the false impression that no nuance is involved. A שׁ makes the /sh/1 sound, what’s so difficult about that?

To make a good transliteration 3 factors must be taken into consideration:

The first consideration for transliteration is the audience. For those in Hebraic studies, šālôm may be a perfectly reasonable transliteration, but to the average person, it is alphabet soup.

The second consideration, closely linked to the first, is the intent. What is this transliteration attempting to do?

If the intent is to simply avoid having right-to-left text, then any transliteration can do.

If the intent is to highlight a relationship between words that would otherwise be obscured by their respective scripts, then a more technical transliteration may be in order. The Arabic word سلام salām and Hebrew word שׁלום šālôm are related, but their respective scripts obscure that relation. By using transliteration, the relationship is made clear.

If the intent is to make the text readable and easily pronounced, then a transliteration that conforms to rules recognizable to the reader is better (e.g. shalom).

Most of Ta’atik’s modules are aimed at making Hebrew text readable for those who do not read the Hebrew script.

Any language can be written in any script. My name written in Hebrew characters — צ׳ארלס — is still an English name. The Mishnah recognizes that even the Hebrew script we know today is originally an Aramaic script (Megillah 1:8b.19).

The target language is understood as the orthography and script of a particular audience’s language. Readers of English readily recognize “sh” as the /sh/ sound, whereas German readers more readily understand “sch” as the /sh/ sound. Even though English and German share the majority of the same letters from the Latin script, the orthographies employed follow their own rules. For this reason, we can talk about transliterating into English, though we mean the orthography and script common to the English language.

Ta’atik modules use the scripts common to the audience’s target language so as to produce transliterations that are easily accessible. Some of the target languages include German, Greek, and Hungarian.

At first glance, the source language may seem simple — it’s Hebrew. Though the script may be used to write Hebrew, we have to ask which Hebrew.

To exemplify this, let’s consider the example of שַׁבָּת and all the various pronunciations it has in the different Hebrew reading traditions.

The shin is realized as /sh/ in the overwhelming majority of reading traditions.

The patach is realized typically as the sound /a/ (like the “a” in ‘psalm’) in most reading traditions as well.

The dagesh affects the bet in another way. In most Ashkenazic and Sephardic pronunciations (and Modern Hebrew which is based off of Sephardic), this is the only way the dagesh affects the bet. In other traditions such as Yemenite and Tiberian, the dagesh also indicates, gemination a feature where a consonant is held for an extended amount of time. In Latin characters, this is often represented by doubling the letters — “bb.”

It is still common to see “bb” in transliterations into English because of the written history of sabbath in English.

In Sephardic and Modern Hebrew, the sound of the patach and qamets are indistinguishable (except for the qamets qatan, but that’s for another day). In Tiberian (the tradition of those who created the niqqud) and Yemenite, patach and qamets were separate sounds and thus represented by different characters. In these traditions, the qamets is similar to the vowel sound in the word “thought,” and is represented by this [ɔ] IPA symbol. In Ashkenazic pronunciations, the sound of qamets can fluctuate between the /a/ sound and the /o/ sound.

Putting It All Together

We can see that even a common word can be transliterated in several ways:

There are other reading traditions that have not been considered here such as the ancient Babylonian tradition and the Romaniote tradition.

In order to create a quality transliteration attention must be given to the three factors above. The greatest difficulty lies not always in following these guidelines but recognizing our own assumptions about them.

An ill defined goal can lead to inconsistent transliterations. The constraints of the audience’s target language and orthography can make it difficult to properly render Hebrew. Additionally, the target audience may already have common conventions for some words, as is the case with English where sabbath already has a well established written history. Lastly, transliterations must be aware of which Hebrew they are using as a source language. Modern Hebrew has become the de facto standard in many cases, but every community may not desire that. When that is the case, custom tools need to be developed.

You can try out Ta’atik’s different transliteration projects below.